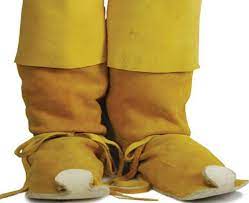 As Anglos encroached into Indian territory, they recognized that the indigenous people all wore some form of a moccasin. There were many similarities in foot attire among the nations and tribes. The material used to construct them came from animal hides. Some were low profile and some high.

The Apache stood out as the most uniquely clothed Native American concerning his foot attire. Tough, durable rawhide, possibly Buffalo or Elk; but certainly cowhide beginning in the eighteenth century, comprised the sole of his mocassin. Lighter dear hide completed the footwear above the sole. Artisans sewed the component pieces together with waxed sinew, dried tendon material taken from deer and other animals to produce a lasting bond.

Their footwear was boot-style, extending up the leg to nearly the knee. The added leather gave protection from snakes, cacti, and other harmful objects along the desert trail. These mocassins were extremely important because the Apache, unlike many other Native Americans, ran from one place to another, rather than always taking a horse to ride. They rode horses; however, they prized the horse more for food than a beast of burden. They chose a migratory lifestyle. They were not sedentary, as were the Navaho and the Hopi.

Consequently, their unique footwear was essential to them. During the conflicts between Apache and US Cavalry in the late eighteen hundreds, many times the Apache traveled on foot seventy miles or more in one day!

The feat seems inconceivable today. However, I have witnessed basketball games between high schools in Arizona where predominately Apache youngsters run their Anglo opponent ragged. Their prowess at shooting hoops and endurance is a legend in that State.

The unique feature of Apache mocassins has to be what the US Cavalry called the “Silver Dollar Toe.” Apache moccasin artisans included a large flap at the toe of their mocassins that provided protection; if the brave kicked something, he shouldn’t. That circular flap looked something like a silver dollar, hence the name. This innovation allowed the brave to run uninhibited by fear that a cactus spine would lodge itself in his foot.

The inclusion of these Native Americans in my second novel in the McBride Series entitled Taken At The Flood provides much drama and excitement. I believe you will enjoy the read. Taken At The Flood can be purchased from Amazon Books, Barnes and Nobel, Book Baby, and other purveyors of fine books.