THE CALIFORNIA, OREGON AND WASHINGTON TRAILS 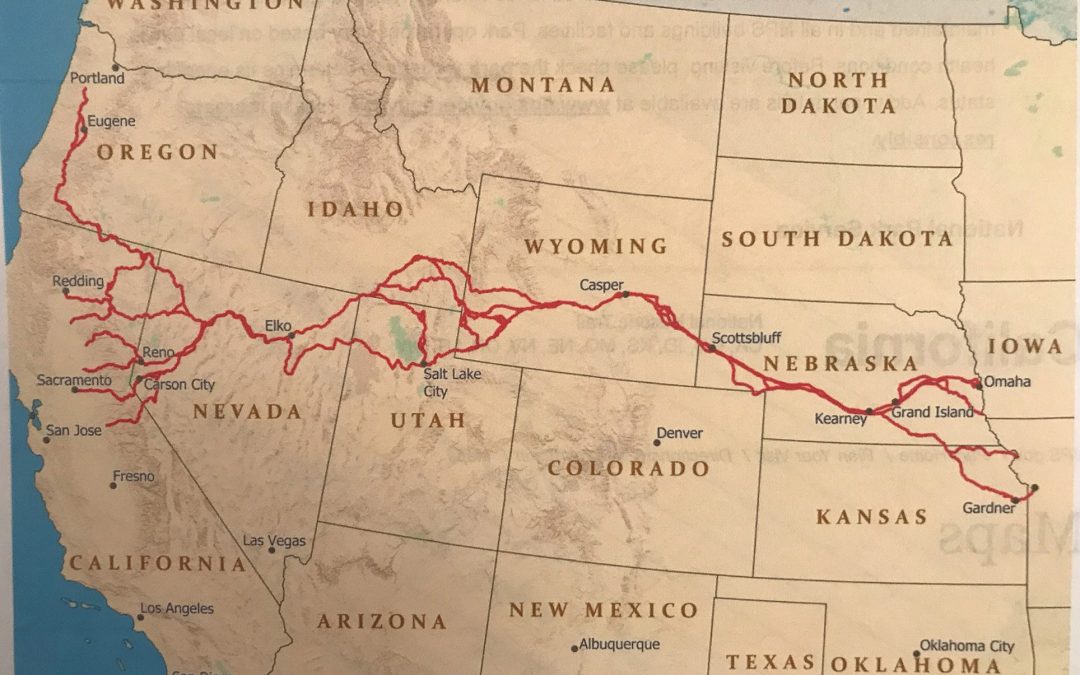 The journey took pilgrims through what are now more than eight States. However, the borders of these States became distinct sometime after the Gold Rush. In the mid-1850s, the Missouri River was the western border of the United States. The territories between the west of the United States to California had been several different countries’ possessions, primarily Mexico.

In any instance, the primary route began at either Independence, Missouri, St. Joseph, Missouri, or Omaha, Nebraska. The vast majority embarked from Independence, however. All three converged in Nebraska to run concurrently for hundreds of miles through Nebraska and a good portion of Wyoming as a solid strand of rope. After reading Equal and Alike, many people have asked me to provide a map of Joshua’s route to California. A view of the United States’ attached map with the various ways ending on the West Coast reveals multiple destinations and interim routes. A glance gives the impression that the trails look like a section of rope stretched across the Continent with frayed ends.

The terrain is mostly level; however, there were many streams and rivers to cross. Frequently, these waterways swollen with snow run-off or rain farther up-stream caused a great deal of time to navigate.

For a short time, the trails split, providing short-cuts to the sojourner’s destination. The objective for the California trekkers was to get to their destination as quickly as possible. The fate of the Donner Party prodded them, as nothing else could. Sometimes they were required to take alternative routes to solve a problem. In my first book, Equal and Alike, the main character, Joshua, suffered an injury that prompted the wagon master to direct the train to Salt Lake City, which was not on his preferred route to California.

In all, four routes split the trail from Nebraska. Two, notably the California Trail, went through Utah. The other two, with destinations in Oregon and Washington, went through Idaho.

The trails came close together again around what is modern-day Elko, Nevada. In Northwestern Nevada, the courses fragmented in multiple directions with California, Oregon, and Washington destinations.

Following the California Trail, from this point, the sojourners headed south to the Humboldt Sink, an area between what is today Reno and Carson City, Nevada. The Humboldt Sink is fascinating. The river spreads out into the desert, creating a shallow boggy slough. The slough water evaporates at about the same pace as river water flow entering the shallow lake, making it a perpetual dead-end for water flow.

Now the trekkers were at the base of the dreaded Sierra Nevada Mountains. Most members of the wagon trains had no idea of the territory they would traverse. However, they knew the tales concerning the trip’s segment having to do with the Sierra Nevadas. The mention of the Donner Party brought immediate aggregation.

On the west side of the Sierras, the remainder of the trip to Sacramento or beyond to San Francisco seemed like a breeze to the sojourners.

The trip to California had as many as sixteen segments, all of which had their dangers and challenges. Under normal circumstances, the distance from Independence, MO to Sacramento, CA was over fifteen hundred miles. The objective of the wagon masters was to get their wards to the destination with minimal injuries and death in one hundred twenty-five days. If you do the math, that works out to fifteen miles per day, on average.

My first novel in the McBride series is Equal and Alike. Much of it relates to the routes and procedures selected by wagon masters to negotiate this vast Continent.

The second novel in the McBride series, called Taken at the Flood, will soon be released. I invite you to go to my website jmkirklandwords.com to learn more about the adventures.