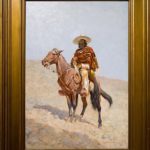 It has been well established that the Californio cowboy, known as a vaquero, is and was the most accomplished horseman who ever lived.  How to prove such a statement?  One way would be to describe how they entertained themselves.  The Carrera del Gallo, also called “the chicken pull,” reveals the extraordinary acumen of the vaquero.

The game would probably have never caught on except for the unusual circumstances in Alto California from the late seventeenth through the mid-nineteenth century.  Large tracts of land awarded to some of the Spanish soldiers who provided security for Catholic priests proselytizing to the indigenous people became cattle producing ranchos.  These ranchos allowed substantive time for the vaqueros to compete with one another.  As competition stretched the imagination of the participants, the games became more and more dangerous,  Carrera del Gallo was such a game.

The concept involved burying a live greased rooster up to his neck in loose soil.  A signal would cause the horseman to ride at full gallop from about sixty yards away.  The object was to reach down, deftly pick the bird from the soil while leaning perilously from the safety of the saddle.  A horse’s withers are somewhere between four and five feet off the ground. That’s a long way for a vaquero to stretch.  Consequently, it was best to select a horse with short legs or be a very tall vaquero.

Vaqueros applied their incredible skills to more than just games.  Frequently, while branding cattle, a steer broke away.  The wary vaquero overtook the animal.  Keeping his horse behind the steer’s head, but running parallel, the rider leaned over,  grasped the tail of the steer, then slid his hand down to the end of the tail.  Next, he threw his leg over the steer’s tail, holding it between the body of his horse and his leg, pulled the rear quarters of the animal off the ground, causing the steer to roll “ass over teakettle.” Errant animals became docile after being “Tailed.”

Although the rider required exemplary skill, his horse had to have a disposition for the game.  Few qualified.  Selection, training, and development of a relationship with the horse was mandatory.

My novel,  Equal and Alike,  explores the lifestyle and customs of the vaquero.  I think you will enjoy reading it.  Equal and Alike is available for purchase on Amazon.com, Bookbaby.com, Barnes and Nobel, and other purveyors of notable books.  See my website jmkirklandwords.com, for more details.